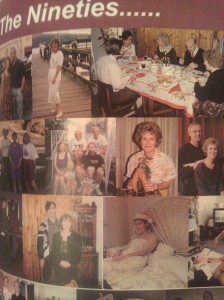 I lost my mum 11 years ago.  My children have never met her.  They have seen photographs and I talk about her a lot but they don’t really understand who she is.

With this in mind I asked my dad if I could borrow the DVD footage he has of her so that I could show the children.  This starts in 1992 when we had our first camcorder.  I was 21 years old.

My expectation of watching the video was that it would be really difficult and that I would spend the evening blubbing into my pillow.  In fact it had the opposite effect. Watching a family party featuring my mother, grandmother and great aunts who are no longer with us made me feel really warm inside.  It brought back memories of large family gatherings and the characters within them that could be so easily forgotten.

Watching myself was interesting too.  I was surprised at how little I said even in comfortable environments.  I could feel how I might be perceived by others and it gave me a useful insight into myself.  Not that I think I still behave like my 21 year old self but it made me think a lot about the importance of communicating (something I have been reflecting on a lot recently).

It also made me think how lucky our children are.  They have the capacity to record their memories on film so that their children will not only be able to see what mummy looked like when she was young, but they will also be able to watch events and see how she behaved at them. They can preserve those everyday moments that are so quickly forgotten.  I wonder whether in the light of this our perception of history will change? We will have a clear picture of what it might be like to live as an ordinary person during a given age in addition to learning about key historical events.

It was a great exercise to watch these films. My children were fascinated by my parents’ wedding film (no sound as it was transferred from cine film).  They could see how quiet the roads were, how the cars were different and that my dad once was a young man with hair. There are members of my family that I only ever remember as being old, how precious it would be to see them when they were young, not only in photographs but  also how they behaved.  My parents told me what their grandparents were like, but I never had a clear picture.  My children will be able to hear my stories but also see what their grandmother and great-grandmother were like .  How precious is that?

One of the main reasons we made the decision to have our own wedding filmed was that the footage would include family and friends who over time would be gone and we felt it was a special way to preserve their memory.

I must make an effort to take more video of our family. Filming the everyday things and not just special events because they tell us so much and jog memories that would be more easily forgotten.

Had fun recording one of my all time favourite picture books for my virtual preschool class. I hope they love it as much as I do! @laurenchildthatsme #picturebooks #picturebooksofinstagram #goldilocks #goldilocksandthethreebears #preschoolteacher #preschoolathome
Maybe not our best contribution - but here are the snow mr men .#mrmenlittlemiss #mrmen #mrmenandlittlemiss #snowday #snowman
Snowball throwing is more fun when you are not the target. #snowday #snowplay #seattlesnowday
My favorite page from It Will Be Okay #netgalley #picturebooksofinstagram #socialemotionallearning 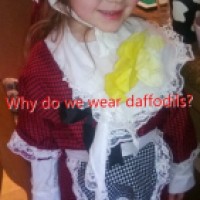