My girls and I have spent a wonderful day at Remlinger Farms.  Considering that it was a full day out alone with my 3 young girls it was probably the least stressful day out I have had in a long time.

Admission was very reasonable at $8 per person (I’m not sure whether this was a special reduced price as  a higher price was quoted on the website) and this included a pumpkin each to take away.  Once we were in the farm everything was free of charge except feed for the animals. 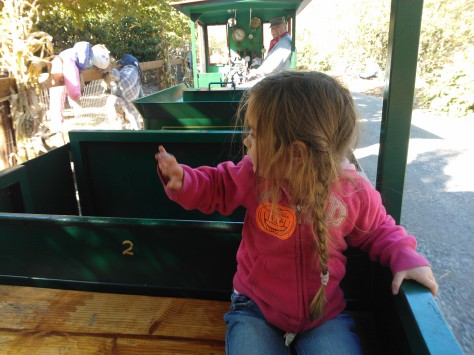 We began with a train ride in a little steam train that took us around the park. My 3-year-old waved at all the scarecrows en route and the horses and the lama.

The playground near the station has an old fire engine and school bus for the children to play in. Some of the stalls selling kettle corn (I assume this is popcorn) and other treats were closed but that stops the kids nagging for food.

To the Far end of the playground is a Pioneer House and inside a lady dressed in traditional costume telling you how she lived.  It was quite amusing to watch my 8-year-old suitably unimpressed by the talk of how they lived before electricity,

They also have a great granddad who remembers what it was like before we had electricity so there were no big Wow moments there.  They loved the chickens ducks and geese in the garden however, especially the little chick.

My little ones loved the hay jump and hay maze, they hid away in the middle of the maze and threw the hay around (until it went in my 3 year old’s mouth).

We fed the animals in the barn, the donkeys and goats were a real favourite.

You are not allowed to bring your own food into the farm but lunch in the café was good quality, the portions were generous and the kids meals included a cookie and drink. I had the chilli which was fresh and very good. In the UK we would often pay premium prices for food at tourist attractions but here a kid’s meal was $5.95 and my chilli was less than $5.

After lunch the children enjoyed the fairground rides. All of the rides are suitable for small children.  The attendants at the rides were really friendly and though there are height guidelines they were flexible and  let my 8-year-old (who was just above the height limit) and my 2-year-old (who was just below) go on all the rides together.  When I went on the barrels with my kids and told the attendant I didn’t really like spinny things but would make a sacrifice for my kids, he kept asking if I was okay .  Some of the rides were closed and a new mini roller coaster is in the process of being built , but there was plenty to amuse the kids.

At the peacock enclosure we collected feathers to use for a fairy garden we are building for my daughters’ birthday party. 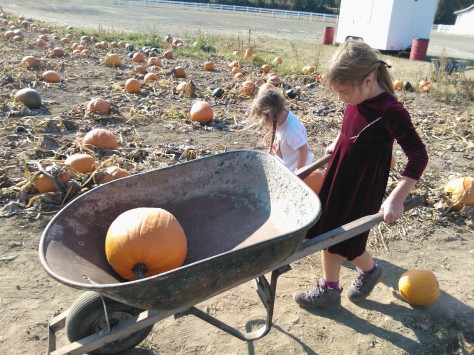 I would imagine that for American children a field of pumpkins is fairly commonplace but for us it was a first and therefore very exciting. We are going to build a fairy house from the large pumpkin and cook with the smallest ones – I’m not sure about the others as they probably won’t keep until Hallowe’en.

The day was rounded off nicely when we spotted horses to the other side of the field. The girls fed them grass and stroked them.

I’ll definitely be returning to Remlinger farm (I think my eldest thanked me about 10 times on the way home for taking them out) and can highly recommend it for families with young children.