My kids are huge Great British Bake Off fans so my daughter chose a bake-off themed party for her 9th birthday. The idea of ten children all baking together at the same time was a little daunting but I needn’t have worried. I think this was probably one of the most successful parties I have organised.

I decided on a basic Mary Berry cupcake recipe to be in keeping with the show.

I bought mixing bowls from the thrift store/charity shop and a pack of wooden spoons so each child would have their own utensils.

I pre-measured the ingredients for making 4 cupcakes and placed the dried ingredients in a ziplock bag. In the bowl, I placed the pre- measured butter and an egg.

half a teaspoon of baking powder

Mix all the ingredients in a bowl until smooth. Spoon into cases and bake for 25 mins at 350 F/ gas mark 4.

The competition was to add additional ingredients to their cupcake recipe to make a unique cupcake and to decorate it with their individual designs.

Additional ingredients to choose from

The children’s names were written on the bottom of the paper case before they went in the oven.

While the cakes were baking, we played pass the parcel and had some British snacks like cheese and pineapple and chocolate digestives. 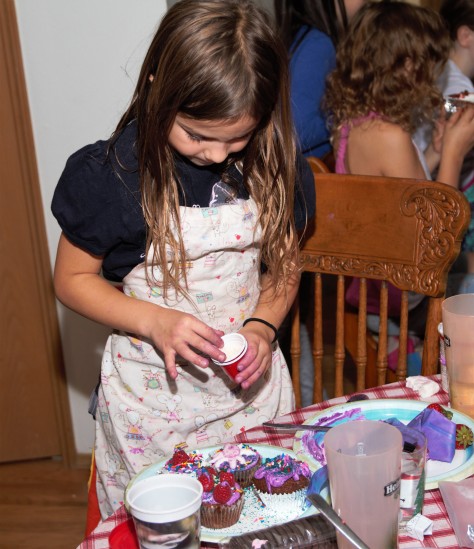 For the decorating stage – they had ready-made frosting (soft icing) and a selection of items to decorate.

Each child chose their favourite cupcake for the judging stage. The cupcakes were given a number but the judges didn’t know who the cupcakes belonged to.

Judging was very interesting ( and amusing). Some were very sweet or had overpowering flavours. I loved the comment from one of the girls, when they were sampling their finished cupcakes.

The winners were awarded a prize and all the children took their cupcakes home along with a recipe card and a teapot cookie cutter. 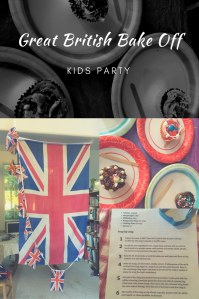 The above party was hosted for 10 children. There were 3 adult helpers, 2 cake testers and the party lasted for 3 hours.