I recently cleaned out the linen cupboard and gave the kids a huge bag of old sheets to play with. They like to make-up stories and turn them into royal capes or build dens with them. In amongst them was a white sheet. I thought it could be used to build a shadow puppet theatre in the garden.  We have a swing set that isn’t safe to use, so I removed one of the swings and fastened the sheet to the frame. 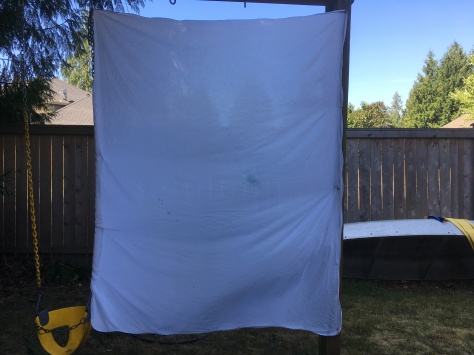 The children and I made puppets from cardboard. The children chose characters and I helped them draw them in silhouette. They collected sticks from the garden, whittled them to smooth them out and stuck the cardboard characters on with tape.

I also found images of hand shadows. I printed and laminated them and stuck them  on the swing set frame for reference.

We had to do a bit of work cutting back the tree branches to make a clear screen, but soon it was ready. The magical stories they have created have been wonderful.  I think this would be a great resource for a school or pre-school to encourage story telling and build the foundations of story writing. You could build it outdoors or inside with a light source behind.

Videoing the story showed the children where they needed to improve. They saw that sometimes you couldn’t see the characters well because they were too low or placed at an angle. They also noticed that the size of the puppet changed according to how close to the screen it was.

I love the way my daughter played with accents and voices.  It particularly love the voice of the bird and banana man in the land of the forgotten.

7 thoughts on “Storytelling with Shadow Puppets”