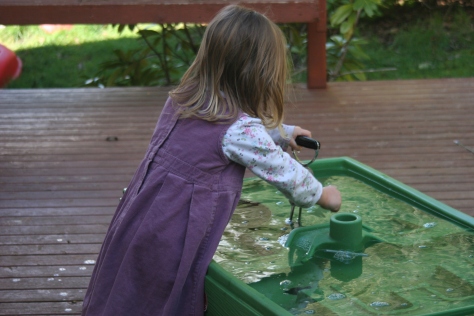 Springtime in Seattle is as unpredictable as springtime in the UK.  Today we have glorious sunshine, yesterday we played in the ice and frost and a week ago we were playing in the rain.

Whatever the weather the girls are drawn to the outside and unlike the summer when they sometimes complain that it is too hot, they tend to stay outside for a long time. 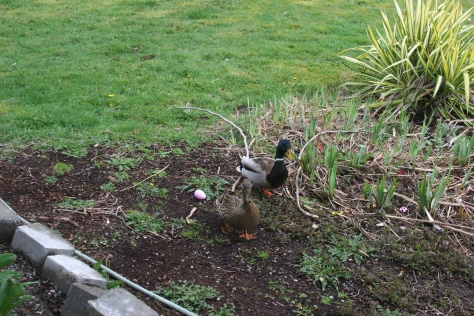 We have a pair of ducks that are regular visitors to our garden in the spring. What better way to get the girls outside than to send them out to find the ducks and feed them.

We had a bug explore kit for Christmas, so while I was doing a little gardening, the girls decided to look for bugs.  The warm weather had brought lots of spiders and beetles to the surface. They were fast and quite difficult to catch.

As I was turning over the soil, the girls decided to dig with trowels for worms and observe them in their pots.

I’ve tried for years to grow wildflowers without any success. We chose to mix the seeds with sand from the sandpit, scatter them and rake them in.  We don’t need to water them too much this time of the year because of the rain and they are slowly starting to grow. Each day we check on their progress and talk about how delicate they still are, so to be careful where we tred.

The girls began by painting pebbles with bright colours and then decided to paint pictures on the driveway.

I suggested that they might like to paint the stepping-stones, they thought this was a great idea. 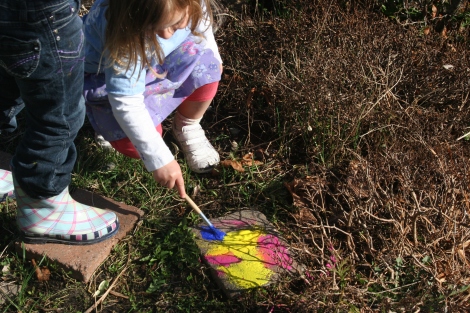 When we take paint outside they nearly always decide to paint hands or feet.  The paint left footprints on the driveway. 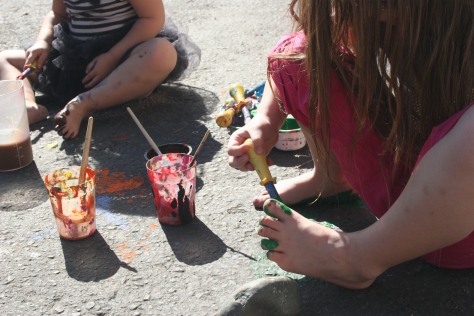 I know, we could play an easy kind of hide and seek. One person hides and we have to follow their footprints.

They followed the footprints across the path. When they got to the grass, they were difficult to follow, so they made arrows from sticks. We found a little piece of treasure, in the shape of one lonely violet.

As we were sat on the driveway painting they noticed that their voices were echoing.

Mummy why do our voices sound all echoing?

I don’t know, do they still echo when we stand up?

We moved something to see if that made a difference.

We are still echoing.

How do you make echoes?

You need a sort of tunnel. It works when we talk in a tube. The driveway doesn’t look like  a tunnel.

I’ll have to dig out ‘Little Beaver and the Echo’ and explore this further.

I love it when they explore the flowers and plants. Heather is great for playing rain showers and we are looking forward to the blossoms falling from the trees and making ‘fairy rain’. The girls were so excited that the trees are full of blossom and ran to tell the other children in the street. 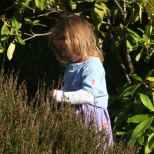 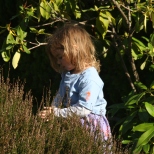 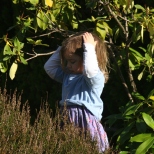 Pavement chalk is  a big favourite.  When the children play in the street together they draw towns on the ground and play that they are visiting the shops or hospital.  Recently, they were playing Harry Potter and drew a huge Hogwarts castle in the road. They collected sticks for wands and branches for broomsticks (I left them the cuttings from trimming the trees) and with a tennis ball they played Quidditch.  The potion station is also perfect for mixing spells.

I suggested that we take water spritzers outside filled with paint.  The girls tried the painting but were much more keen to take them out with only water in.

First they wanted to clean. 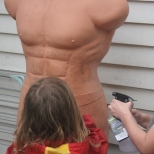 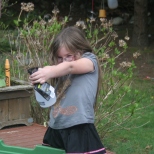 They wanted to spray each other, it wasn’t really warm enough but my 3-year-old had a good idea.  She ran to fetch her umbrella.

I know we could use this as a shield. 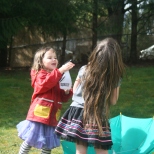 With rain expected for the weekend – I wonder what other ideas they will come up with.

9 thoughts on “Ideas for Outdoor Play in the Springtime” 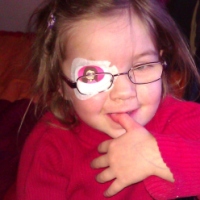