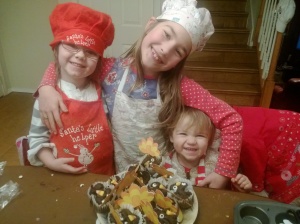 As an outsider ‘Thanksgiving’ is a bit of a mystery.  My basic understanding is that is a time to say thank you, get together with family and eat a big turkey meal and is associated with harvest festival.

However, as a young child you might be forgiven for believing that it is a celebration of turkeys.  Whilst browsing Pinterest a few weeks ago, I was overwhelmed by the amount of turkey crafts. There were a few posts about ‘trees of thanks’ but every other Thanksgiving activity included turkeys. I asked my 9-year-old

You’ve learned about Thanksgiving at school. What do turkeys have to do with Thanksgiving?

I have no idea.

Did they eat turkey at the first Thanksgiving?

I know that turkey is eaten at Thanksgiving but then we eat turkey at Christmas and we would think it a little weird if everyone started making turkey crafts for Christmas.

I did a bit if searching on the internet.  The origins of Thanksgiving come from the arrival of the pilgrim fathers to America from Plymouth, England.  The journey across the ocean on the Mayflower was dangerous and many lives were lost.  Coinciding with the European Harvest Festival the pilgrims decided to hold a feast to thank God for their safe arrival and invited the native Americans to join them.  It is suggested that 4 turkeys (a native American bird) were killed for the feast (though it is likely they ate many other local fowl, game and seafood too).  The turkey came to be known as a symbol of affluence (even in Victorian times only the very richest Europeans could afford to eat turkey at Christmas) . I assume therefore, that the turkey at thanksgiving symbolises a way expressing thanks for prosperity.

I was interested to find out if my-5-year old knew what Thanksgiving was.

I know what it is. It’s when we give lots of stuff.

She remembers her friend across the road bringing her pretzels last year.

Why do we give stuff?

To say Thank You

How do you think they got here?

I think it would make a lot of sense to help their understanding of Thanksgiving if they could understand how difficult it is to travel on a boat without an engine for thousands of miles across the ocean.  I  looked for a book from the Library to help explain. None of them seemed quite right until we found this one, a simple description of the pilgrims journey from the point of view of the children. 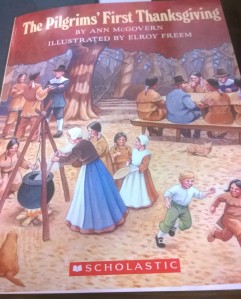 I decided to take the idea to a free build play session where we began by reading the book.

The children were very interested in the fact that the pilgrims could only eat certain foods on the boat like hard biscuits.

“Yes but not if you ate them all the time.”

” How did they manage the journey without getting scurvy?” asked another.

“A good question, many of them didn’t”

A parent had donated large cardboard boxes for us to make a replica of the Mayflower. Fourteen children worked collaboratively to build the boat.  They added a mast and sail, lifeboats, steering, roof, a plank and loaded the boat up with food from the play kitchen.

It has been left up for the children to continue to play with and develop their own stories.

I think that makes more sense than making a turkey out of a pine cone.

2 thoughts on “Thanksgiving – A Festival to Say Thank You for Turkeys?”